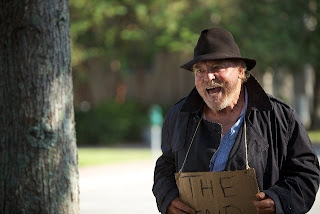 For Weather Wars I have mercifully decided to give it a mini review and get down to the basics. This film stars Stacy Keach, a down and out scientist named Marcus Grange, who manipulates storms to kill those who have cut his budgetary funding for the weather project he developed. He has such control he can create an area specific lightning bolt out of thin air and one strong enough to damage the Pentagon.

His two sons, David and Jacob, played by Jason London and Wes Brown attempt to stop him, but it is not till the addition of his ex cute research assistant Samantha Winter (Erin Cahill)that the ball to stop him starts to roll. Erin is a rather talented actress and the film picks up once she is on board. I eagerly await her next project, he personality shines through this very average film

One thing leads to another and the last man left for Marcus to kill with his Weather Wars is a Senator. The film moves along at a rapid pace never boring, but the plot is so outlandish, in the fact that how could three able bodied younger folks, FBI, and various other law enforcement folk not catch a 70 year old man who moves like molasses.

Bottom line, I give this a 4.5 out of 10, some decent special effects and one adorable Erin Cahill, save this from a bottom of the barrel stinker.
Posted by Dan's Movie Report-Danny Templegod at 9:58:00 PM