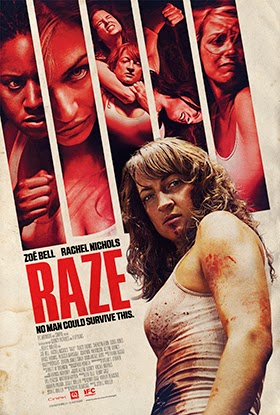 Well then, it has been over two years since this cool film graced my website, and gladly I can say without question that Dan's Movie Report was the first site on the web to give it press coverage. Sadly I was unable to make it to any of the screenings, and and bless her sweet heart producer Allene Quincy was trying to get me a preview copy. Finally I saw the film on IFC Midnight! So Bang here goes my descent into literary madness, follow along, or comment and hate, but be warned, girls are violent! My philosophy I am a writer, I let those who fight, fight!

What we have in a nutshell, is a tournament style fighting film, somewhat of a throwback to "Van Damme in Bloodsport", style stuff, ultra-violent, vengeful, but with somewhat of a heart. The main character in the film is Zoë Bell (Sabrina), and she delivers her fiercest performance to date as the tormented and reluctant fighter fighting for her freedom. She has a huge role in Raze and really shows solid, and thought provoking emotional depth in the film.

Ruthless underground fight purveyors, Elizabeth and Joseph played by: Sherilyn Fenn and Doug Jones  stop at nothing to torment the girls prior to their fights, and force them to fight to the death while others watch. Yeah I know what my readers are thinking, I have seen this before, yayaya, well no, you have not, as usually women in fighting films are lets just say more on the over the top silly side. Make no bones about it, or shall I say "break many bones about it", these ladies are full of rage and confusion. Stripping down the sexiness of the ladies is a cool concept as well. An endless flow of female action and fight films make sure the ladies look proper, happily these ladies look disheveled, hair a wreck etc, and they are all outfitted with the same sweatpants and t-shirt. Why is this important, on an deeper level it strips away any notion of not only femininity, but a sense of one self, they are "Owned" "Property" and serve the almighty. All of the characters have only first names in the film also suggesting a sort of one in a crown mentality where there is zero individuality. Sardonic duality, cascading destitution and foreboding resolution permeate Raze, this proving looking at the world through rose colored glasses is the opposite as looking through the world with a detached retina! Bang!

Rachel Nichols for the sci-fi show Continuum, is fabulous as her character is developed in the beginning, she had a producer role in the film as well, clearly a labor of love project.  Rachel has a certain realness to her acting, not only delivering her lines but adding humanity weight of the world gravitas to them.

Actually many of the minor characters, are underdeveloped, but they serve a purpose, for example Tara Macken as Dee; portrays a lost soul, with sad empty eyes, her fight was merciful, but a tumultuous, yet predictable outcome ensued. Tara is such an accomplished fighter, my one small complaint about her fight was that it was over far too rapidly. Tara Macken is one to watch! Check out her full interview on Dan's Movie Report: @ http://dansmoviereport.blogspot.com/2013/04/tara-macken-interview-exclusive-dans.html

I could go on and on about each fight, each fighter, I will save words, and sum it up:  All of the combatants tell a short story about themselves as they are walking to the cement walled, dirt floor fighting room. Raze is not a Disney film, hell it is not even as nice and cuddly as the last Batman, nor the new Ben Affleck 'extra chunky' Batman haha, this is violent, dark, brooding yes, but super bloody and sad, which is why Raze is the style of film that will sadly only find a niche audience.  I had to watch the film a few times prior to my review, and to come up with a rating of 8 out of 10, minor flaws, such as a really short running time, but the tone, mood, and outcome are diverse and appropriate, and painfully awesome to witness, whoa, I am OUT~!.

The film is available now on IFC Midnight http://www.ifcfilms.com/films/raze , and Tuesday May 20th everywhere click the link below to order on Amazon: