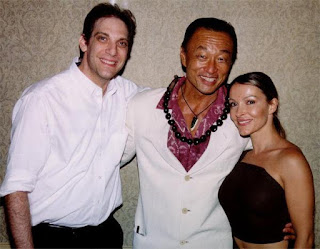 Master Tagawa is a multi-faceted actor who has been in dozens of movies and TV shows. Perhaps his most widely recognized role is Shang Tsung in Mortal Kombat. Most recently he can be seen on the hit TV series Hawaii 5-0 on CBS. In 2012 he will be featured in a few exciting new films.

Dual Of Legends film follows the story of a young boy, whose parents are killed,and was raised by a monk. He must fight to survive and find out who is behind the trafficking of young girls.

Mr. Tagawa is also starring in an epic 18th Century Samurai film called 47 Ronin. In this film a roving band of samurai set out on a quest to avenge the death of their master. Keanu Reeves also stars check IMDB for now, I will post official photos soon as the arrive.

Watch Dan's Movie Report for future news, photos, and interview with Mr. Tagawa in 2012, in the meantime check out his cool official site @ http://www.caryhiroyukitagawa.com/
Posted by Dan's Movie Report-Danny Templegod at 11:05:00 AM