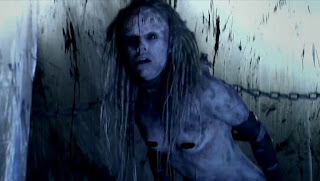 Good thing she is chained up! Image (C) RISEN PICTURES

Before I start this review,which will be brief, I have to comment how much I love the title. Unfortunately the film falls rather flat in the execution. The premise is not new, bringing back a loved one from the dead to ghastly results, and in Kiss the Abyss the sweet young lady Lesley brought back turns into a (((Spoiler))) rather blood thirsty savage.

The idea was pretty good, but the acting was kind of wooden and I just could not become engaged in the characters. The lead actress who played Lesley seemed to lack direction, just not full on into the character.

The locations used were very basic, but effective for this type of movie and budget. Although too much time was sent on some locations, like the drawn out beginning, and not enough time on developing other characters, in the context of the scene.

I did like the make-up, prosthetic work, and some crazy aspects during the end of the film. While most of the film's acting falls flat I have to give particular kudos and mention to the ravishing actress who played the feral type creature at the end of the film, cute in a frighting, running away sort of way haha. If everyone gave that intense of a performance in Kiss The Abyss the film would be way more entertaining to watch. See top photo!

I am sure this film will find an audience, however, I just could not get into this film as the acting for the most part bogged it down. I give it a 4 out of 10.

For More information sharpen your fanged browsers to: http://www.kisstheabyss.com/index.html
Posted by Dan's Movie Report-Danny Templegod at 11:16:00 AM