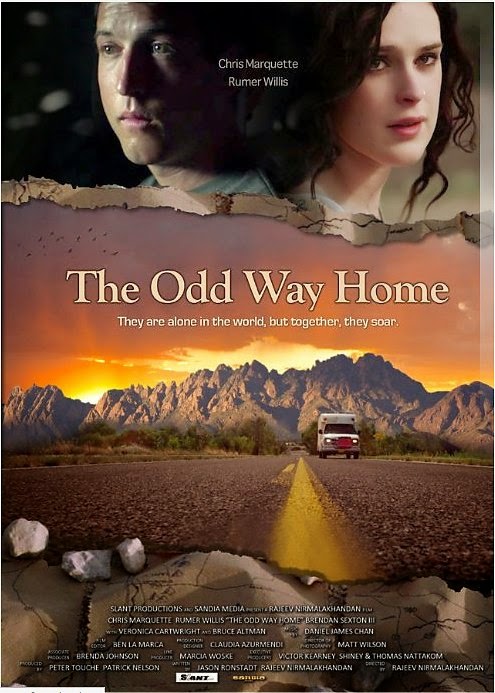 From Breaking Glass Pictures comes a sordid tale of two lives intersecting at a point in time. Rumor Willis portrays a young woman named Maya, who was beaten by her boyfriend, and she embarks on a road journey, and she meets up, (well actually ends up at his house, and steals his truck with him in it) with an autistic man named Duncan, portrayed by Chris Marquette.

Obvious comparisons to Rain Man aside, The Odd Way Home is a great film, merging two genres together, as it is a true crazy, off the wall road film, and a heartwarming touching drama. The pair are in virtually every scene and ultimately end up searching for their parents. No spoilers, but they go through a myriad of life's issues, between her drug problems, bruises, and his autism, the film touches on several sensitive issues.

Rumor Willis, is pretty amazing in her first real feature drama. Her character Maya, shows the right amount of strength, yet enough vulnerability to maintain a balance. Chris Marquette's "Rain Man" portrayal is diverse and interesting. He has moments of clarity, shrouded in the structured chaos that is autism. I am sure if this was a theatrical film, awards would be mentioned, difficult performances for the young actors.

Powerful scenes, occur, when Duncan and Maya, meet with their parents, or what is left, more like a shell of a family unit. The stark contrasts, yet odd similarities, seem to draw the pair closer together. Duncan's father is a rich powerful man, who wants nothing to do with him and Maya's mother is picking up the pieces of her shattered life as well. Do not want to give these scenes away, but the two actors Veronica Cartwright who portrayed Maya's mother and  Bruce Altman who played Duncan's father, are so amazingly realistic, it leads me to believe, that this film touches on some air of reality in either their own lives or the life of writer/director Rajeev Nirmalakhandan

The Odd Way Home, is not a film to be taken lightly, as it delves deep into the autism situation. The Odd Way Home is in no way preachy about the subject, as it is presented in an objective way. I recommend the film as a purchase from Breaking Glass Pictures, The Odd Way Home rates a solid 7 out of 10.

The film is available June 17th! Click the Amazon Link Below for Purchase!